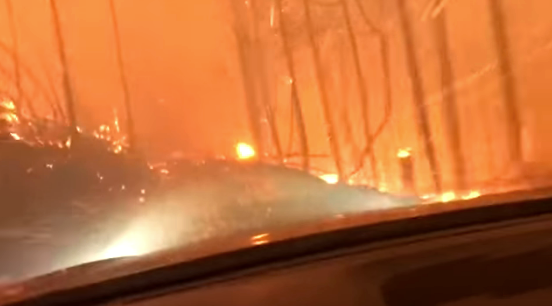 BOSTON, MA – The video taken through the car’s windshield shows wind-whipped flames closing in on the road from the forest on both sides. An older man can be heard calmly telling the driver to go faster. The driver’s voice, that of a younger man, asks, “Do I go?”

The driver speeds up, and the older man answers, “We’re going to find out up here in a minute, aren’t we?” As the car turns a corner and embers fly toward the windshield, he speaks again: “I think we can drive through this.”

Thus begins a viral video of a Boston-area father and son, Charles and Justin Bilton, trying to escape a forest fire in West Glacier, Montana, on Aug. 12.

It was the end of a two-week vacation in the woods, Justin wrote in a Facebook post. The men knew that a wildfire had started recently because of lightning on a ridgeline not far from their campsite near Lake McDonald. Fire crews told them it wasn’t likely to spread, and they continued on their trip.

They’d driven their rental car down a dead-end road to get to a trail and hiked to the campsite about two miles into the woods. Suddenly that small fire became a big fire, and the two decided they better get out of the woods.

They broke camp, hiked back to the car and started driving through the the trees. Everything seemed fine at first and then the orange glow in the woods started getting brighter. That’s when the men started taking video.

Justin can be heard on the video asking what would happen if the car explodes. “Dad, we got to get out of here,” he says. He also can be heard praying “Jesus, God help us. What if a tree falls on us? Oh God help us.” They turn a corner and seem to be out of a patch of fire.

Then they come upon a line of fallen, flaming trees blocking their escape route. Embers fly toward the windshield like snowflakes. Here the video ends, amid a bit of an argument about whether they should try removing the trees. “We’ve got gloves,” argues Charles.

In the end of the video Charles tells his son to throw the car into reverse and the two returned to their camp.

They were eventually able flag down a boat piloted by two park employees, who helped them get aboard, leaving the car, the campsite and the inferno behind them.

According to the National Park Service, the fire grew from a few acres to several thousand over the course of a few hours. “Windy and dry conditions fueled the fire to rapidly expand,” the Park Service wrote.

When he was safe, Justin posted the video on Facebook:

“We were camped 2.5 up the North Macdonald Trail when we saw the then small Howe Ridge Fire began to spread from 5 acres to over 2000 in a matter of hours.
We hiked back to the car to get out where it was parked at the end of a dead end road. We had just driven this road (safely) 3 hours before to get in and it was our only way out, apart from trying to stay ahead of the fire on foot. After we were stopped by the downed tree, we reversed back through all of this and were rescued by two park employees on a boat. They saved our lives.”