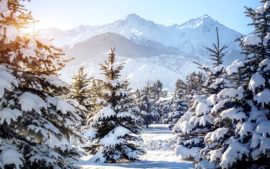 BOSTON, MA – Massachusetts is being slammed with its first major storm of the season, a multi-faceted system that could dump up to 18 inches of snow in parts of the state and as much as 8 inches in the Boston area, according to the latest forecast Sunday morning.

The storm will have different impacts around the state, bringing a mixture of rain and snow. It started late Sunday afternoon and is expected to switch to a wintry mix overnight, potentially turn back into another burst of snow Monday night and not leave until Tuesday morning, at times stopping to let people catch their breath throughout Monday.

Forecasters are calling for 12-18 inches in the western and northern parts of the state, up to a foot in Worcester County and much of Middlesex and Essex counties and 6-8 inches in Boston and north of the city. The lowest amounts will come south of Boston and along the coast, while the Cape and Islands could just see a dusting.

All but the areas expecting the lowest amounts are in either a winter storm advisory or warning.