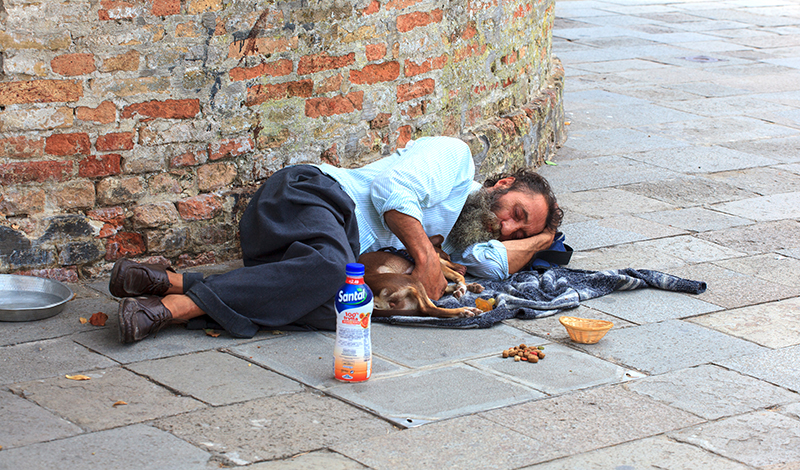 DENVER, CO – About 100 members of an urban camping colony and their possessions were moved Monday by Denver Police and members of the Department of Public Works near Catholic Charities’ Samaritan House homeless shelter.

“At its largest, we counted 55 tents,” Mike Sinnett, vice president of shelters for Catholic Charities. The site in the Ballpark neighborhood has been a frequent spot where campers pitch their tents, but he said this group was larger than he’s seen previously.

“We continue to be concerned about the people living outdoors exposed to the elements,” said Ann Cecchine-Williams, deputy executive director of the Denver Public Health Dept. in an email. “The health and safety issues are now obviously severe, and the increased number of complaints from the area businesses, residents and from the service providers themselves, including the Samaritan House, confirmed for us the need to act. It’s not safe, healthy or humane for people to be living outside in the conditions we are seeing in the Ballpark area.”

There is room for people to sleep at Samaritan House, and services were offered to the campers, but they were, for the most part, declined.

“There are so many different reasons why,” Sinnott said. “Some people are service-resistant. Some like to take part in the freedom the camping and the freedom of being outdoors. We reach out to them regularly inviting them to come into the shelter,” he said. Some of the urban campers have been known to verbally harass people using the shelter.

“[Denver Dept. of Public Health] issued an order temporarily restricting the sidewalk (public right of way) access in an area generally bounded by 21st Street, 24th Street, Larimer Street, and Arapahoe Street, so that our crews could get in and clean sidewalks and alleys in the area, while keeping everyone safe,” said Nancy Kuhn in an email. “Denver had outreach teams out there last week letting people know we’d be there today to clean. There were three fires out there in the last two weeks, so we had fire concerns as well.”

Police and public works personnel left notices and told residents in advance that the area would be cleaned up. But some clashes took place on Monday.

“If we keep it cleaned up and we ain’t bothering nobody, and we’re not harassing anybody, we have the right to rest,” a woman called ‘Scrappy’ told Denver7.

Samaritan House has “extended stay” reserved dorm beds for 150 men, 48 women, and 21 families. They also run a drop-in emergency shelter for women which can hold 175-200 women every night.

“Any woman experiencing homelessness, will be fed dinner, housed overnight and fed breakfast the next morning,” Sinnott said.

The city’s 2012 Urban Camping Ban gives police the right to move people off of public property and confiscate belongings. But it has been sporadically and unevenly applied.

A federal class-action lawsuit filed on behalf of people swept off the streets of Denver is winding its way through court, as reported in Westword.

There is now a citizen petition to put a repeal of the ban on the 2019 ballot.

“We’ve …been concerned about cold weather coming,” said Nancy Kuhn, in an email. “During our most recent cold snap, four people living outdoors died. Our goal is to bring folks inside and connect them with services that can improve their situation, both short term and long term.”

There are reportedly 3,000 people experiencing homelessness in Denver.

Cathy Alderman, of Colorado Coalition for the Homeless, said there is a shortage of space for family groups and couples and that some people experiencing homelessness will not go into a shelter if it means giving up a pet, for example.

“There are hazards with letting people sleep outside. There are hazards to neighbors, to public space. There is a natural tension here that is very complex …We can’t expect to stop this and expect [camping colonies] not to crop back up. Moving people to other places in the city doesn’t work,” said Alderman. “We need an alternative solution not just overnight on a mat in a building.

“This is a human crisis, there is a human face to this,”Alderman said. “This is not about tents and waste and needles. It’s about people trying to survive. It’s up to Denver and the government to make sure that there are spaces maintaining health and safety until we can get people housed.”