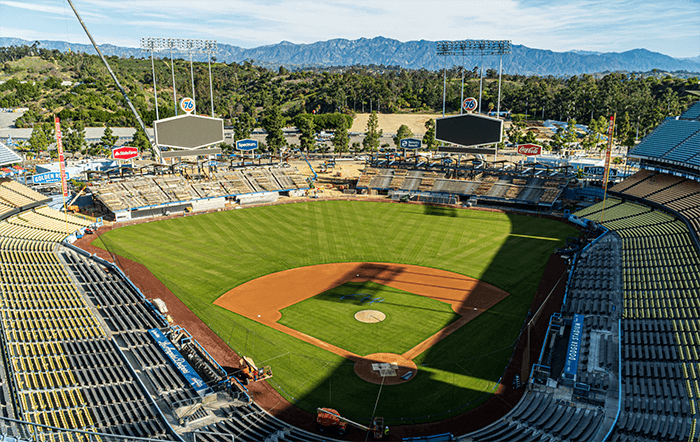 As the absence of the baseball season has become a symbol of the outbreak’s toll, officials hope the massive testing center at the famed baseball stadium will be a beacon for our way out of the outbreak with expanded testing. Los Angeles Mayor Eric Garcetti, Los Angeles Fire Chief Ralph Terrazas, and Dodgers CEO Stan Kasten were on hand for the site’s official opening at 10 a.m.

In announcing the center on Friday, Garcetti said health officials would be testing as many as 6,000 people a day at the new location.

“I know that we all have fond memories of summer nights at Chavez Ravine, taking in a game and cheering on our boys in blue. Now, even with baseball season on hold, we can still go to the stadium to find help and hope,” Garcetti said. “And we have specifically designed this site to move people through the process quickly, alleviating long lines and wait times.”

Video screens will show footage of how the test works to drivers waiting in line, in an effort to make testing quick and keep lines moving.

Any Los Angeles County resident can get tested for free but must make an appointment online ahead of time. Priority will be given to those with symptoms and for front-line workers.

Those who want a free COVID-19 test can sign up at https://covid19.lacounty.gov/testing/.