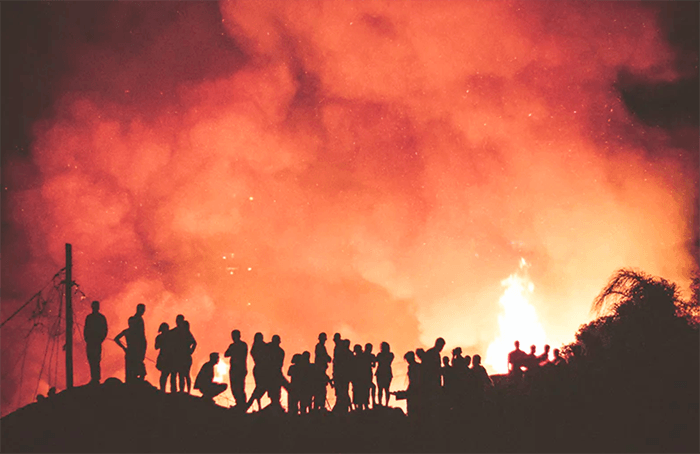 LOS ANGELES, CA — An outdoor fire spread to a downtown produce market amid a red flag fire warning in Los Angeles Monday afternoon, but no one was injured.

The fire, which caused outdoor propane tanks to explode, was reported about 3:20 p.m. and spread to a nearly 20,000 square-foot produce market in the 800 block of South Kohler Street, between Produce Row and East Olympic Boulevard, according to Margaret Stewart of the Los Angeles Fire Department.

The fire was upgraded to a “Major Emergency Incident” about 3:45 p.m., and 112 firefighters responded to battle the blaze, Stewart said. Crews doused the flames from the exterior before moving inside, due to “extreme fire conditions.”

The fire was extinguished about 5 p.m., but the building’s structural integrity was compromised, according to Stewart.

No other buildings were damaged, Stewart said. People were advised to avoid the area with firefighters expected to work through the night to clear debris and extinguish hot spots.