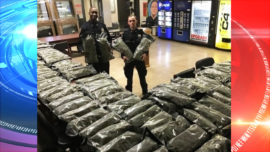 NEW YORK CITY, NY — Cops are boasting they busted a 100-pound shipment of marijuana but the owner says it’s legal cannabis and he wants it back.

East New York’s 75th Precinct tweeted a photo Sunday night of the proud officers standing in front of what they said was 106 pounds of weed they’d recaptured the day before.

“Great job by Day Tour Sector E,” the precinct tweet reads. “Working with FedEx and other local law enforcement, they were able to confiscate 106 Lbs. of marijuana, and arrest the individual associated with the intended delivery.”

But owners of Green Angel — a CBD distributor based in New York City — claim the bags contained their legal product and the shipment included papers that prove it.

“This was our shipment. My brother was falsely arrested,” the owner wrote on Instagram. “Those bags were all hemp. All documents were in each box.”

“Please spread the word!” the owner added, “We need to let people know we are not criminals!”

Owner Oren Levy told the New York Post a FedEx driver reported the $30,000 worth of goods to the Brooklyn Precinct where it was tested by what Levy called an outdated method that missed the .14 percent THC level, which is legal under federal law.

Levy’s brother was arrested but released Sunday without bail, according to the Post.