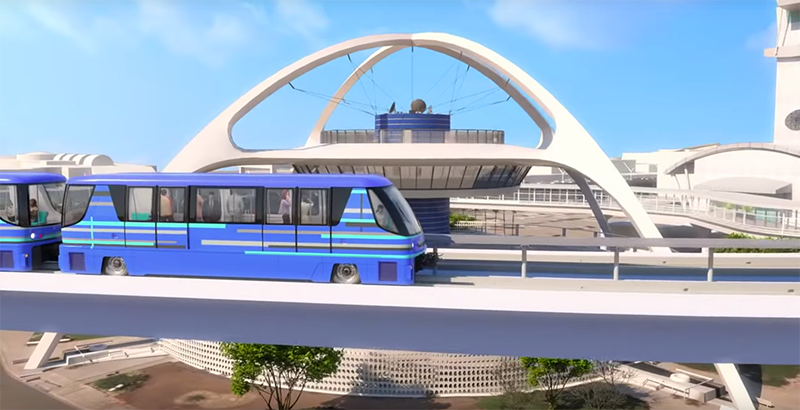 LOS ANGELES, CA — A groundbreaking ceremony was held Thursday for the 2.25-mile Automated People Mover at Los Angeles International Airport, which aims to cut down on auto traffic traveling in and out of the airport.

The project has a targeted opening date of 2023.

“Everyone traveling to or from LAX should have access to modern, reliable public transportation that gets them to their destination on time,” Mayor Eric Garcetti said. “The Automated People Mover is a historic investment in our city’s transportation infrastructure — a milestone that will create middle-class jobs, reduce traffic congestion, and deliver a world-class experience for travelers.”

Last year, the City Council approved a $4.9 billion contract with LAX Integrated Express Solutions for the design and construction of the Automated People Mover system that will carry passengers among terminals and connect with nearby rail lines.

According to Los Angeles World Airports, the People Mover will feature trains traveling among six stations — three inside the airport terminal loop and three outside the airport.

The system is expected to connect with the Metro Green and Crenshaw/LAX light rail lines, and also with a planned Consolidated Rent-A-Car Center that aims to bring The facility will eliminate the need for rental car courtesy vehicles to enter the central terminal area and reduce the number of autos driving in and out of the airport by an estimated 3,200 each day, officials said.