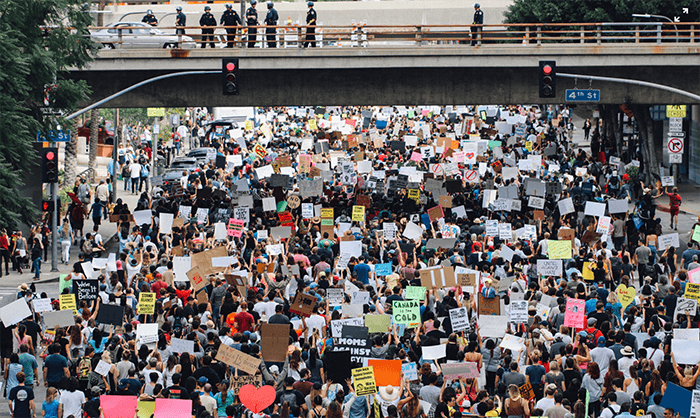 LOS ANGELES, CA — As Los Angeles County digs out from another day of protests and looting while bracing for more of the same, a curfew was instituted across the entire county, enabling police to arrest potential protesters and looters alike Monday.

What started as peaceful protests in Van Nuys and Hollywood quickly turned unlawful Monday, according to the Los Angeles Police Department. Looting was reported in both neighborhoods and arrests are ongoing. A looted strip mall in Van Nuys has been set ablaze amid reports of gunfire, and a small crowd of protesters was arrested after curfew outside the Los Angeles Country Club in Westwood Monday evening.

Shortly after 6 p.m., the Los Angeles Police Department set up a skirmish line near Gregory and El Centro avenues in Hollywood, where a large number of protesters gathered. Splinter groups have fanned out through the area, and some looting has occurred. A small group of looters used the crowd as cover to raid a Sunset Boulevard Rite Aid

As of 7 p.m., protesters were attempting to stop looters from entering a Walgreens, at 1050 N. Highland Ave., near Santa Monica Boulevard, in Hollywood. A group of demonstrators on Sunset Boulevard near Gower Street faced possible arrest for curfew violation at 7 p.m. as police sought to clear the streets and chase down looters. Some were running from police northbound on El Centro

Hundreds of protesters gathered at Sunset Boulevard and Vine Street at around Monday and headed east towards Sunset and Bronson, past businesses boarded up for fear of the damage seen in other parts of the city.

At Bronson, many in the crowd paused and kneeled in an intersection, before heading north to Hollywood Boulevard. Many cars driving have honked in support, even when the protesters are blocking traffic.

The crowd was holding a huge red banner saying, “Say Their Names!” a reference to George Floyd and the countless African-Americans killed by police. Other signs saying “Black Lives Matter,” “End White Silence,” “Your Silence is Violence” and “America Do Better.”

A protest in van Nuys similarly splintered with agitators began breaking into and looting several businesses along Van Nuys Boulevard south of Sylvan Street, according to ABC7. The looting began near a gathering of peaceful protesters outside the Van Nuys Civic Center.

A Boost Mobile store was looted at Van Nuys Boulevard & Gilmore Street along with a nearby pharmacy. Police quickly chased the looters away, arresting two of the suspects.

NBC4 showed one officer attempting to stop a looter fleeing pharmacy, swinging a baton at the looter, who managed to slip away. Police officers in Van Nuys appear to be taking a more aggressive approach to the looters than they did during the rioting over the weekend.

Near 8 p.m., a strip mall was on fire in the 15700 block of Vanowen Street, near the San Diego (405) Freeway, according to Nicholas Prange of the Los Angeles Fire Department. According to Prange, there had been a report of a shooting at the scene, but firefighters found no patients or suspects at the scene. The fire damaged at least three units prior to firefighters extinguishing the fire.

Earlier in the afternoon, hundreds marched from Van Nuys City Hall, chanting, “No Justice, No Peace.” The demonstrators met a community on edge. For hours, Sherman Oaks had been a trending topic on Twitter, with many debating the merits of looting in wealthy San Fernando Valley neighborhoods.

Some businesses in the area boarded up their shops, and car dealerships began moving their inventory for fear of looting and vandalism. Los Angeles Police officers were seen moving into the neighborhoods surrounding the ongoing protest Monday afternoon. Several people have reportedly been taken into custody, and the protesters appear to have somewhat dispersed.