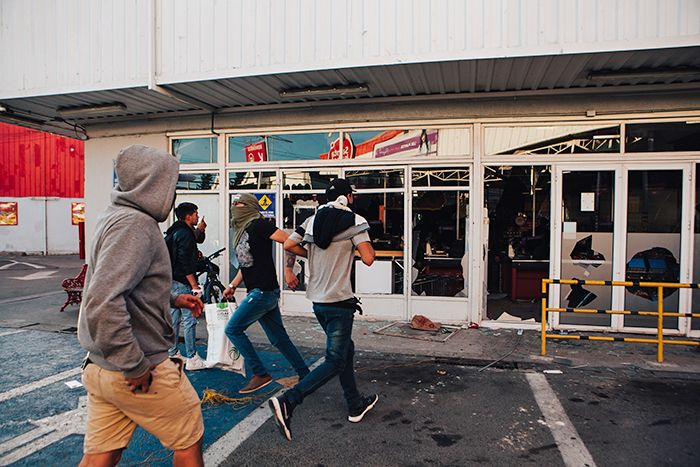 Shortly before 1 p.m. hundreds of marchers swarmed Santa Monica Boulevard and La Cienega, lying in the intersection and blocking traffic. Multiple protests continued in Downey and Long Beach as demonstrators showed no sign of scaling back protests against police brutality and the death of George Floyd beneath Minneapolis police officers.

Still, the countywide curfew was pushed by to 9 p.m. after a day without looting Tuesday. And organizers with Black Lives Matters in Los Angeles planned a barrage of protests to the South in Newport Beach Wednesday.

The protests were largely peaceful punctuated by a terrifying moment in Newport Beach when a driver plowed through a crowd of protesters. No one was seriously injured, and the driver was arrested on suspicion of assault with a deadly weapon.

The protests dominating LA’s wealthier Westside communities as well as Wednesday’s demonstrations in Newport Beach are part of a broader strategy to breach the barriers that inoculate elites from the suffering caused by police brutality and racism, according to Black Lives Matter organizers.

“We want to go to places of white affluence so that the pain and outrage that we feel can be put right in their faces,” said Melina Abdullah, one of the leaders of Black Lives Matter, told the Los Angeles Times.

Three of the Minneapolis police officers involved in Floyd’s death were arrested and charged with aiding and abetting second-degree murder Wednesday. Though prosecution for police brutality is a rallying cry for demonstrators and a longstanding goal for Black Lives Matter activists, the arrests weren’t enough to halt the ongoing protests. Activists continue to demand reform of local police departments.

Across Los Angeles County, most cities in the area will adhere to the county’s curfew hours, but Culver City and West Hollywood will both impose curfews at 6 p.m., while Beverly Hills will impose one at 1 p.m. in the business district and citywide at 4 p.m.

At noon, hundreds of people gathered at Santa Monica and La Cienega boulevards for a rally organized by the LGBTQ community in support of Black Lives Matter.

Participants peacefully stood on sidewalks on all four corners of the intersection, holding signs and flags, although the gathering eventually spilled into the street as the crowd swelled to more than 1,000. At one point, hundreds of protests were seen lying in the street and taking part in several minutes of silence.

The group marched to Robertson Boulevard and back, then later marched again on a circular route through the heart of Hollywood. The group then splintered, with some marching back west into West Hollywood, while hundreds more walked south to Mayor Eric Garcetti’s official residence in Hancock Park.

In downtown Los Angeles, hundreds of protesters again amassed outside City Hall, but by early afternoon, the crowd moved around the corner to the office of District Attorney Jackie Lacey. Members of Black Lives Matter have been holding weekly protests outside Lacey’s office for more than a year, condemning what they see as her failure to prosecute police officers accused of misconduct.

The downtown crowd swelled dramatically within an hour, with a mass of humanity packing Civic Center streets.

Lacey, appearing on ABC7 Wednesday afternoon, insisted her office has not been soft on police. She said the District Attorney’s Office “under my leadership has actually prosecuted more than 20 officers for use of force.”

“I’m the only prosecutor in the state who currently has an officer-involved shooting case filed and pending,” she said. “And so while it may seem like things are not happening, they actually are.

“… Each case is different. They can’t lump all the cases into the same category as the one we are experiencing now,” Lacey said.

A smaller march and rally was held in La Verne, with about 300 people marching — joined by city officials and police. Another march was held in Downey, with police also keeping a close eye on the activity.

At least two protests were held in Long Beach, along with one in Warner Center. In Redondo Beach, several dozen protests peacefully gathered in front of the South Bay Galleria and held up signs and chanted slogans.

The sheriff’s department and Los Angeles Police Department took some heat Tuesday night from UCLA for using the university’s Jackie Robinson Stadium as a “field jail” for arrested protesters and breaching anti-coronavirus measures in the process.

“We’re troubled by accounts of Jackie Robinson stadium being used as a `field jail,”‘ the university tweeted about 10:30 p.m. Tuesday. “This was done without UCLA’s knowledge or permission. As lessee of the stadium, we informed local agencies that UCLA will NOT grant permission should there be a request like this in the future.”

Faculty members claimed police put protesters arrested in downtown Los Angeles and Westwood on sheriff’s department buses and brought them to the stadium, which is also being used as a COVID-19 testing site.

“All protocols of social distancing were violated by the L.A. County Sheriff’s Department and LAPD with protesters deliberately crowded into buses and officers not following rules and recommendations established by the city, the county, and the CDC, including wearing masks,” stated a letter signed by 59 members of the UCLA faculty.

“When protesters were taken off the buses, they were subject to processing in the parking lot of the stadium and then released, which meant that they were directed to find their way home late at night (between 1:30 a.m. and 3:30 a.m.) from the Jackie Robinson Stadium. Without working cell phones and under conditions of curfew, this was a near-impossible task…”