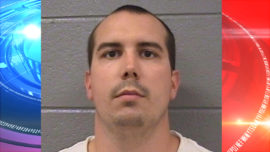 BROWNSTOWN, MI — An Oak Lawn man convicted of exposing himself to a group of Mt. Greenwood children in 2013 was arrested this past weekend when he drove to Michigan to meet a 13-year-old girl who turned out to be an FBI agent, according to a federal complaint. Daniel Vorberg, 37, is facing a federal felony charge of attempted enticement of a minor in Michigan.

While out on parole for the 2013 public indecency conviction, Vorberg was arrested again in June 2015 when an Oak Lawn police officer claimed that he saw Vorberg parked behind a daycare center fondling himself while watching toddlers playing.

Vorberg told police he was applying lotion to himself while waiting for a doctor’s appointment in an office next door to the daycare center. After awaiting trial in Cook County Jail for a year, he was found not guilty in 2016 during a bench trial. Vorberg was let off with a stern warning from Cook County Judge Kerry Kennedy.