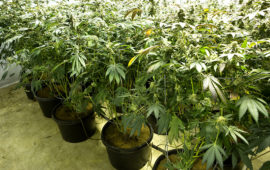 SALEM, MA — The U.S. Attorney’s office asked Salem and other Massachusetts communities to turn over documents related to the host community agreements they signed with marijuana retailers as part of a federal grand jury inquiry. The investigation is an effort by federal prosecutors to crack down on potential corruption at the local level in the state’s newly-legalized recreational marijuana industry.

“We are fully cooperating with this request and have been in communication with the U.S Attorney’s team to coordinate the compilation of the requested records,” Dominick Pangallo, chief of staff for Mayor Kim Driscoll, said in a statement. “We strongly believe that we have engaged in a fair, open and professional process with respect to medical and recreational cannabis facilities in the City of Salem and are working to provide this information and respond to this request.”

State law is murky on what is and is not acceptable. The state says municipalities can only collect up to three percent of revenue for five years, and that those receipts need to be related to the direct costs associated with hosting the stores. But communities have argued the law does not prevent them from collecting separate fees or requiring the retailers to make donations.

In Salem, for example, recreational cannabis stores pay a three percent local tax on all local sales but have also combined to pledge to donate more than $250,000 to local nonprofits. Critics say those upfront payments combined with the high legal and consulting fees needed to secure licensing are stacking the deck in favor of big, corporate players in the state’s cannabis industry.

Ward 5 City Councilor Josh Turiel, who was the city council’s appointee to the committee that reviewed the host agreements, said in a Facebook post late Monday that he would not discuss particulars of the agreements or the federal investigation because they contained private business information.

“I will say that if the federal inquiries into agreements include Salem’s work I’m looking forward to it all,” Turiel wrote. “I read all the proposals, gave my thoughts on what I believed were the strongest ones as input along with a number of other people, and that input was part of what the mayor used to make a judgment on what four companies would get host agreements.”