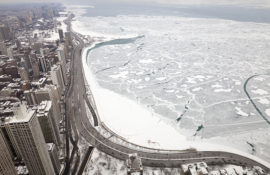 More than 450 flights out of O’Hare International Airport had been canceled by 9:30 a.m. and about 100 from Midway, according to the Department of Aviation. Delays at O’Hare averaged more than 90 minutes. At Midway, flights were delayed by an average of fewer than 15 minutes.

A winter weather advisory for much of northeastern Illinois and northwest Indiana is in place through 2 p.m. The National Weather Service forecasts up to six inches of snow in parts of the Chicago area.

Earlier Monday morning, officials at O’Hare reported a ground stop for all planes until 8:30 a.m. after an American Eagle flight slid off the runway. There were no injuries.