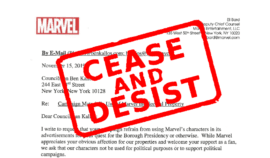 NEW YORK CITY — A New York City council member got a friendly reminder from Marvel Comics that he is not Captain America … so stop dressing like him.

Ben Kallos, the Upper East Side rep running for Manhattan borough president, got a cease-and-desist letter Friday after his campaign sent a “Superhero Alert” with a photo of the elected decked out in full Captain America garb.

“Like Captain America, he can do this all day.”

Soon after, Kallos received a cease-and-desist letter from Marvel’s deputy chief counsel Eli Bard, who was less than amused with the parallels drawn between captain and candidate.

“While Marvel appreciates your obvious affection for our properties and welcomes your support as a fan,” wrote Bard, “we ask that our characters not be used for political purposes.”

Kallos shared what he called the”charming” with his Twitter followers, noting he “got a kick out of it, though you might too!”

Got this charming letter from @Marvel and got a kick out of it, thought you might too! https://t.co/azqawtAmQY pic.twitter.com/iP0vDkOaWF