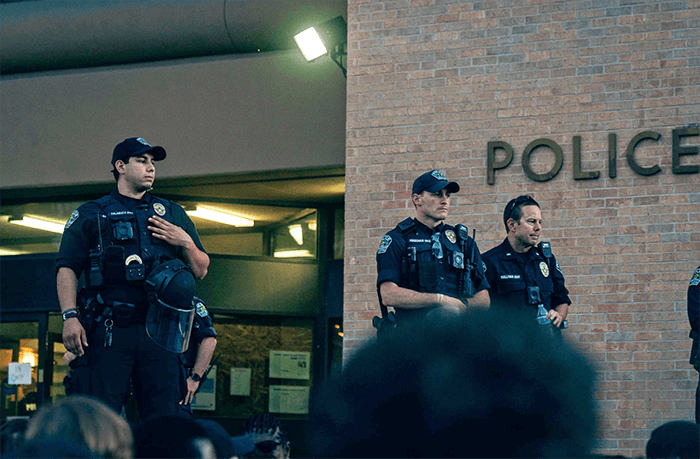 LOS ANGELES, CA — Activists, parents, and students spoke out Monday in support of defunding the Los Angeles School Police Department, something the Board of Education will discuss Tuesday.

A coalition including members of Black Lives Matter Los Angeles and other community organizations, parents and students said during a digital news conference they support total elimination of school police, arguing that Black students are disproportionately targeted for arrests.

“Now is the time to be bold and take action to defund school police. It’s long overdue,” said Sarah Djato, a student representing a group called Students Deserve, which conducted more than 5,500 surveys with respondents overwhelmingly stating police are not necessary for schools.

Los Angeles Unified Superintendent Austin Beutner last week announced that a district-wide budget review this summer will include a deep look at school safety officers. He reiterated Monday that the issue is complex and requires consideration by a designated task force that he has appointed to report back to the board with its recommendations.

“Before one rushes to judgment on this issue, it is important to look carefully at the lived experience in schools in the communities we serve and remember school campuses must be safe for all members of the school community: students, staff and families,” he said. “Those looking for a simple answer will be disappointed because it doesn’t exist.”

Regardless of what the task force ultimately recommends, Beutner said “random wanding” searches will stop as of July 1, and he is recommending the elimination of officers’ use of pepper spray and carotid holds.

Pepper spray was used four times last year by officers at LAUSD, but Beutner said chokeholds have not been used for as long as he can remember.

“We cannot ignore legitimate concerns and criticism that students and other members in the school community have about all forms of law enforcement,” Beutner said. “The culture and climate of schools must be founded on inclusion and respect. No person should feel the presence of a safety officer on campus as an indictment of them or their character.”

LAUSD police — who are not part of the Los Angeles Police Department – – responded to more than 100,000 calls last year, including threats of mass shootings and bombs at schools, as well as robberies, sexual assaults, burglaries, and other serious crimes, Beutner said.

Activists who want school police banned on campuses reported that Black youth represent less than 9% of the district’s student body but account for a quarter of all arrests, according to the Million Dollar Hoods Project at UCLA.

Of the Students Deserve survey respondents, 86% called for the defunding of school police, including 88% of Black students.

But different stakeholders do not agree on the issue, with teachers union leaders backing the elimination of school police, while unions representing principals and other workers expressing the opposite view.

Former LAUSD Superintendent Ray Cortines wrote a letter in support of the Los Angeles School Police Department for officers to remain as “guardians” of the community.

“The LASPD is not only an organization that has proven to be a model agency across this country but an organization that unites a balance of safety with compassion and empathy towards our students, teachers, and staff,” he said. “The LASPD has the privilege to protect and serve approximately 600,000 students and close to 69,000 employees, coupled with the responsibility to safeguard the billions of dollars in district assets and interests. Before making any decision to remove LASPD officers from the district, I would request that you consider the potentially destructive consequences.”

“We must ask ourselves a fundamental question,” Caputo-Pearl said. “Why have we over the last decade’s increased police presence in schools in communities of color, especially significantly Black schools, while we have allowed academic and social-emotional supports to be cut? The answer is institutional racism and implicit acceptance of a culture that criminalizes Black students. We must break that cycle.”

UTLA and groups such as Students Deserve support Board of Education member Monica Garcia’s proposal to cut the school police budget by 90% by 2024. Garcia’s proposal is one of several motions up for discussion Tuesday, and advocates say it closely aligns with their ultimate goal — total elimination of school police.

“We are encouraged by Monica Garcia’s motion, and we urge all LAUSD school board members to vote for it,” UTLA representatives stated.

But Beutner said the complex issue requires further research by his appointed nine-member task force, which includes himself as well as educators, former public defenders and prosecutors, and public policy experts.

“Together, we will look at what is needed to keep schools safe as well as what students need to feel free from stigma and to feel they are a respected part of their school community. We will ask hard and uncomfortable questions and come up with concrete recommendations.”

The task force is meeting twice a week and plans to deliver a progress report and initial recommendations to the Board of Education sometime in August.

Serving on the task force with Beutner are:

“I’m grateful to Superintendent Beutner for convening this task force,” Estrada said. “At this moment in our country, there is no issue of greater significance. Therefore, it is critical to have a diversity of views, both within the Los Angeles Unified community and outside of it, to evaluate the role of the Los Angeles School Police. … I am humbled and honored to be part of this important project.”

But advocates and students against police at schools — many of whom rallied and marched in the downtown area last week and plan to rally again at Tuesday’s board meeting — argue that an LAUSD task force is not an adequate response since they believe they already have the research to support a total ban on police in schools.

Joseph Williams, representing Students Deserve and BLM-LA, said public pressure for action is high. He said he wants to see the change that has been needed for many years to happen while there’s momentum for it.

“Urgency is at an all-time high,” he said. “Our lives matter. We shouldn’t continue to be criminalized in this way.”

Melissa Mack, the mother of a 4-year-old about to go into kindergarten, said Black youth have a negative perception of police because of what they’re seeing on television. She and others said it’s not good for a child’s psyche to see cops shooting Blacks on TV and then see them at the entrances of their schools.

“Let’s stop policing our kids and let’s start educating them,” she said.

LAUSD bus driver Jan Williams, who is also a parent, said her son doesn’t feel safe when he sees police on his school campus. She called seeing officers a “trigger” for her son, stating that the teenager is traumatized by “police prowling the campus all day.”

Beutner said what’s most important is taking a much broader approach to addressing institutional racism in schools, going beyond that of the issue of school police.

“School police represent less than 1% of Los Angeles Unified’s budget, and the 400 or so people in the department are an even much smaller fraction of the more than 75,000 employees in Los Angeles Unified,” he said. “… This moment cannot be about more words and false promises. It has to be about real change based on logic, reason, thoughtful analysis, and genuine engagement with all the stakeholders in the school community.”