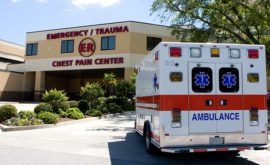 SEATTLE, WA — Swedish Medical Center will close emergency departments in Seattle and Redmond ahead of a planned strike involving thousands of nurses, caregivers, and other staff this week, the hospital announced Monday. The planned closures include two ERs in Ballard and Redmond, and the Labor and Delivery unit at Swedish Ballard.

The emergency department closures are set to begin Monday at 7 p.m., with a projected reopening date of Friday, Jan. 31 at 8 a.m. The labor and delivery unit closed over the weekend and is slated to reopen at 9 a.m. Friday.

The Seattle Times reports the Redmond and Ballard emergency rooms to have 18 beds each. The Ballard location treats an estimated 65 patients per day.

In a news release, Swedish said the hospital would use temporary staffing agencies to work during the strike, but it was not possible to staff all departments.

“For over nine months, caregivers have been making urgent proposals for safe staffing levels and improvements that would recruit and retain more workers,” the union said in a statement. “While caregivers have been struggling, the company had $24 billion in revenue and $11 billion in cash reserves in 2018, and raked in $970 million in profits in just the first three quarters of 2019.”